Ragozin grew up in Russia – studying at the Polytechnic College, in Stavropol.

His work had participated in numerous exhibitions in Russia; Madeira, Portugal; and Bermuda. Now he is starting his more recent sculpture life in Canada – exhibiting in Victoria BC, and at the Canadian Sculpture Centre in Toronto.

He was elected into the SSC in 2016. His practice is based in Toronto.

In my work, I want to explore the spiritual influence of light and its influence on the contemporary environment. By using 21st century technology LED lights and combining them with urban materials such as copper, aluminum, brass, and wood as well as natural stones and quartz crystals, I create wall reliefs. 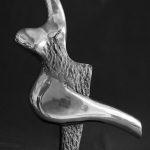 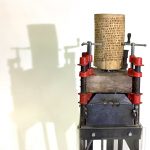