b. 1956 Ottawa, Canada
At an early age Chippie Kennedy developed an interest in the presentation of the human figure – the body as a show-piece for clothing. This led her to pursue a degree in Fashion Design from Ryerson University and a career designing on 7 th Ave. in New York City. She found the transition from cloth to clay paralleled the search for the inner self and for understanding of human form and spirit. Kennedy enrolled in the Florence Academy of Art and received her master’s degree in 2012. Since then, she has exhibited internationally. She was a finalist in the ARC Salon in 2014, 2015 and 2017, and won “Best Portrait Award” at the Canadian Portrait Society Competition in 2017. In 2012, Kennedy’s sleeping nude Daphne
was included in National Sculpture Society’s Sculpture for a New Century at SUNY Orange in upstate New York. Her work is included in private collections in US, Canada, Mexico, Italy, France and the UK. Kennedy is a Member of NSS. Her studio is based in the historic Lunenburg Academy, Lunenburg, Nova Scotia.

I began my career as a fashion designer in New York City. After years of designing my fascination with texture, drape, form and movement left me wanting to deepen my understanding and appreciation of the physical body beneath the clothing I was creating. I realized that I no longer wanted to dress the body but to sculpt it.
My work and process are intuitively organic and seek to give life to my clay and composition. With each piece I want to expose the raw and palpable nature of the body and its form, be it human or animal. I view my work as an invitation to the on-looker to be enjoyed and experienced through both sight and touch.  Each graze or stoke of a hand brings subtle changes to a finished piece of sculpture. At that moment the piece belongs as much to the viewer as it does to the artist. 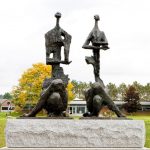