Yu graduated with a Major in English Literature and a Minor in Fine Arts from the University of British Columbia. Since completing his B.Ed at Trent University, he has been teaching in Toronto and Hamilton.

Yu has exhibited his work at UBC, Vancouver, BC. Relocating to Toronto, he has participated in solo and numerous exhibitions at the Canadian Sculpture Centre, The John B. Aird Gallery, and the Propeller Centre for the Arts. His work is included in private collections in Vancouver, Toronto, and Hong Kong. He was elected into the Sculptors Society of Canada in 2009. Currently, his practice is based in Hamilton ON.

A good portion of the inspiration for my work deals with the subject of desire and the human propensity for emotional grasping in all its manifestations.  The object of my investigations into these areas tends to manifest themselves in works which serve as illustrations of the shortcomings of such behavior and function as referential markers to the viewer of the ultimate futility of allowing their lives to be swayed by their emotions. 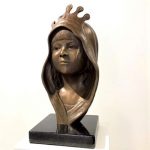 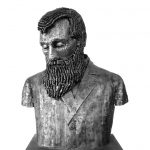