Switzer was born in 1944, Oshawa ON. He graduated from the Ontario College of Art in 1972, majoring in Sculpture. He prefers working in bronze, although his repertoire also includes wood, clay, metal, stone, and fibreglass. He worked in the advertising industry for nearly a decade prior to dedicating himself to sculpting on a full-time basis in the early 1980s.

During the 1980s, Switzer focused on creating monumental-size works, including The Pod jointly commissioned by Montreal Trust and Manufacturers Life Insurance Company. Created and unveiled in 1989 as tribute to orca whales and donated to the City of Vancouver, The Pod is a bronze sculpture of two whales gently riding waves.

Rick Switzer has been a member of the Sculptors Society of Canada since 1990. His studio is based in Pontypool ON

For years I’ve been working on monumental works – representational, abstract, or conceptual – are inspired by all elements of nature. 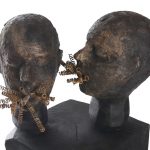 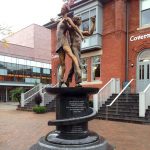